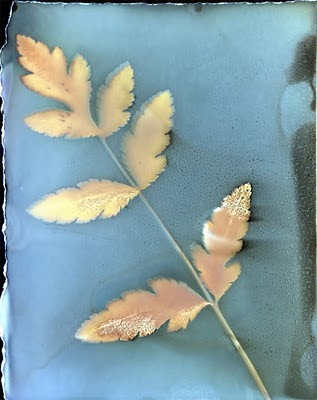 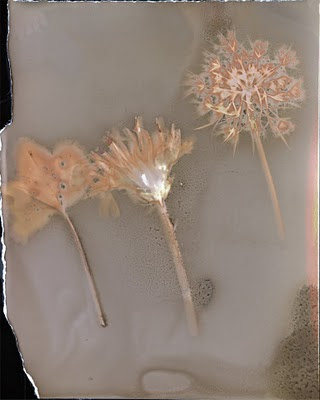 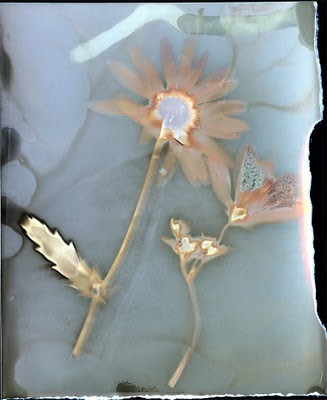 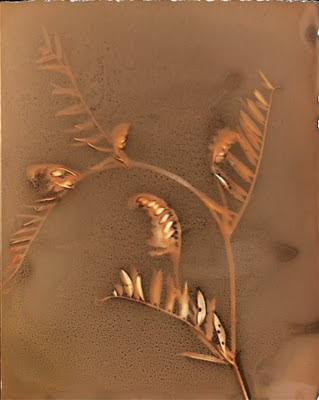 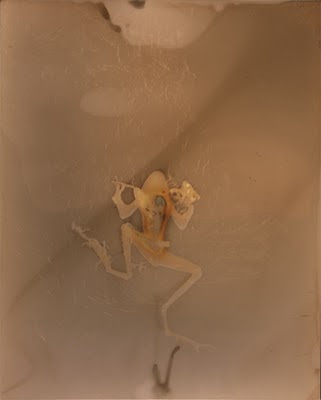 While you all wait an inordinate lentgh of time for me to post again, I have been busy or not busy at festivals, while at the last one images from which I will post one day (being realisitc here) I was mulling over what my next workshop at the reserve would be as it was booked for the first morning after returning from HESFES.
So I decided upon something easier on the organisation and got the kit ready for some Lumen prints which would hopefully give results that all would enjoy and with not a great deal of effort. So the tiny little toilet on the reserve was blacked out in preparation for the fixing of the images once they were thoroughly cooked by the sun that morning. The first batch the paper was wet to help pull out some of the colour from petals and then they were sandwiched between glass like a contact print. The results were great and the children and adults loved the images. The usual organic matter was placed on the BW Ilford photo paper for varying times but all at least 50 mins to one hour, when I say usual I meant flowers but one did include a partially desicated frog which came up with a nice result.
The only fix I had was the Ilford rapid fix which unfortunately did not do the prints much justice and in some of them I cold see the colour being leeched out, a shame a some of the flowers had bled and the colour was picked up by the BW paper. I did think at the time that there needed to be another solution. After finishing the pieces that had been made by the children and showing them the prcess in the darkroom. I decided to lay out more for myself these I would take home and leave for as long as possible, they did in the end get exposed for aprox. eight and a half hours before fixing I thought I would try scanning them as I do the solargraphs, the colour is always retained on them when I do it so I figured it would work the same way, luckily it did and these were much better but I still needed to fix. Ammonium Thiosulphate was in the Rapid fix and having done a bit of research I discovered that Hypo was what I needed, Sodium Thiosulphate by it's chemical name and I should then use hypo check to make sure it's still doing it's job!
Mr Cads saved the day and I got both for my next workshop. The images here are some of those done with the children and also some are my later experiments on dry paper for 8+ hours.
For further info and really beautiful images visit the late Jerry Burchfield's site, stunning images and such a loss to the alternative print processing world.
Posted by Kylewis at 23:20