Part two of the quicky review of last year!

April, May and June, seem to have whizzed by but I am happy to say I have been busy, probably too much to think straight but here is a super quick review of the last few months.

April, a little crazy and busy with three events and prep for a larger one. It was the Gabriel Fine Art SLWA group show, the second I had been in and then almost at the same time came submissions for the "Curious Camera show" something I always try and submit to but never quite get there. Anyway this year I did submit and work was accepted and also to may great joy it received an "Honourable mention" absolutely over the moon or should I say sun!
Curious Camera is held at Arts eye Gallery Tuscon Arizona USA.

The piece was a solargraph, Urban Sunburn IV it had been left 'cooking' for three months Jan - Mar 2015 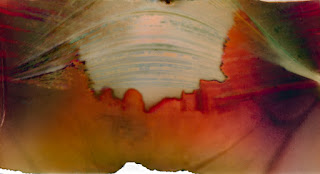 At the same time as this was happening I was prepping for the Format International Photogrpahy Festival to be held in Derby at The Photo Parlour. The exhibition was a group show with the theme "Unstable"
We had all been preparing ideas for a while and mulling over what we wee to include and how it would be presented, the show featured work by Melanie King, Nettie Edwards, Anthony Carr, Jo Gane and myself.The exhibition could best be described as an exploration of works that were designed to change, to challenge the concept that a photo is a fixed record of a moment, as evidence of the existence of something as proof that there 'was' an event. This was to be a light hearted and interactive exhibit.

I decided, eventually to include Lumen Prints that would be totally unfixed, the paper would also be degrading by the very fact that I was using extremely expired fifty year old Kodak Bromide II paper that hadn't been stored correctly and I really had no idea how it would behave. I had done test prints but had not left any of them out in direct sunlight after exposure for such a length of time. It was determined that the prints would remain covered until the last minute before PV and then we would see how they would fair in the light.

Surprisingly by the time I got to visit, there was still quite a lot to see and only aspects of some of them were diminishing quickly, considering they were opposite a window I was impressed. For the "playful" element to my piece I was to include an interactive exhibit. this after some deliberation became a print making kit that would allow the user to move "stencils" and laminated flowers over a length of Kodak Bromide paper which had been attached to foam board. The laminated sheets were then held on with pushpins, the results were really quite lovely, even if they were pockmarked with pin holes.

It was truly brilliant to be part of such a festival and I also got to meet Brian Griffin and see a preview of the film about him, I did like the packets of popcorn thrown out to us! 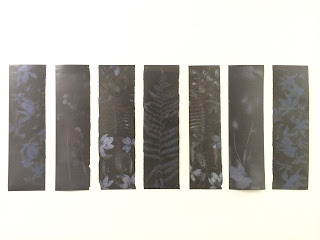 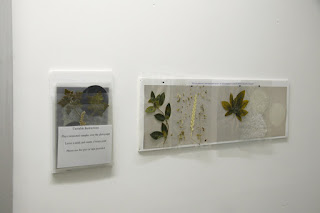 Beginning to catch up here and heading into May for a weekend long event at Stave Hill Rotherhithe South London.
Soundcamp and Reveil was held last year and I made pinholes and soalrgraphs in response to the brief. I wanted to capture the moments over the event from early sunrise to dusk and that would bmena long exposures. The time element was important to me, it hooked up with the duration of the event and the sequence of Soundcamp dawn chorus happenings that occiured around the planet in 24 hours.
Solargraph cameras were set up in four positions in London and due to the inclement if not dreary weather, it was decided that they would be placed for longer than the weekend in order to capture som efeint glimmer of sun on the paper. It sort of worked despite the rain and the gloom. Some of the positions here were just too dark and they didnt captur every much at all, others were better but still quite abstract and not as full of arcs of the sun or colour for that matter!

I also made a few pinhole photos with both my Da Vinci 4x5 and the Zero45, I obviously had some issues with these as I havent yet had a good print from the zero, which I am shocked at. it seems to have some leaking issues that I need to trace the source of befor doing more. either that or the paper was flookily fogged each time it went in the dark slide for that cam.

As part of the project htis year we, Grant Smith the head of the project, decided that the visual aspect to the event should be extended to all participating countries. I was to make soalrgraph cameras which would be postal tubes. these would act as the carrier for the rest of the project and they would also contain, amongst other things, a homemade matchbox pinhole camera that would be used for the duration of the event and then returned to myself for processing. I have had some baack already and the results are interesting and varied to say the least.

The solargraphs really are subject to the weather and luckily the one from Santorini was fabulous, depsite it being heavily creased in the return packaging. I have yet to recieve them all back and Im looing forward to seeing what was produced from sound artists. I do hope they had fun with them, as that was the idea as well.