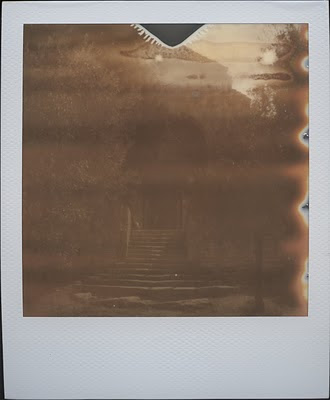 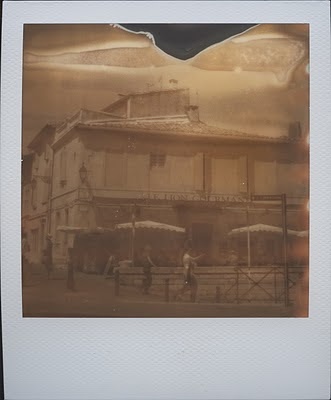 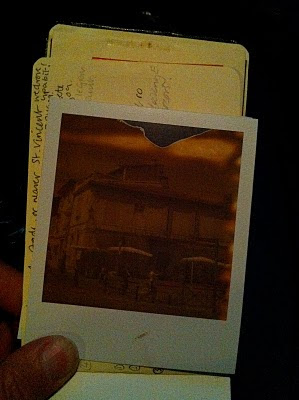 Here are some Impossible PX pics from France that are disappearing before my eyes, as I was saying in my previous entry the film was working in temperatures averaging 34 deg so I suppose it was going to cook pretty quickly but I am amazed at the amount of crystals on these, especially as it is supposed to be the more stable 100PX. I'm curious what the 600 will do now that I'm back in England.
The darker images here were taken on a phone within a day or so of them being taken so in some respects they had already started their deterioration. The scans were made one week after returning, if I had realised I would have scanned them within minutes of emptying the car!
Arles was hot and my SX70 was always in my bag so it could have got warmer than ideal. This image was taken while sitting in the shade of the Ampitheatre, now used as a Bull Ring it was a very bright day beyond the shade, the image was covered as it came out and then put between the leaves of a sketchbook straight away. The gloop, as usual spilled out the back. The chemicals did not spread to the top and there is a build up of crystals primarily at the top where the streak is, though the rest is covered in what looks like a fine misting of salt.
The next image is the Chappelle of St-Gabriel Tarascon we came across this place whilst driving west toward Le Pont du Gard, it was amazing, set in an olive grove it had once had olive presses and been the centre of a large commercial business hundreds of years ago, now it was silent but for Cicadas and their susseration in the tinder dry landscape. Sadly this image didnot like the heat it went brown straight away i didn't bother taking another. Instead I look forward to the Holga images of the place.
Posted by Kylewis at 23:12