Patience can be a virtue sometimes, especially when you are waiting for a particular image to develop and develop it does, very very slowly. I was cutting back the plant jungle in my front garden one morning during the summer and looking down I could see the beautiful remains of the leaves on the concrete and surrounding these were black stains. These stains were from the Ficcus plant, which was hanging over the wall and above the pavement.This got me thinking that if the concrete was a suitable substrate for the juice and it seemed pretty difficult to remove with water then what would it be like if it was on paper!

I removed some of the berries which form in interesting bunches. The berries were hard and black, difficult to crush under ones fingers and so I used a pestle and mortar and started pulping them. It takes some time to get a bunch of these berries crushed enough, they are rich in colour but need to have a liquid added in order to carry that colour.

I used rainwater which was there in front of me, lazy I know but I wanted to keep it as natural as possible. I made enough to push through a small sieve and remove any of the grittier bits that were from the husks and the seeds. 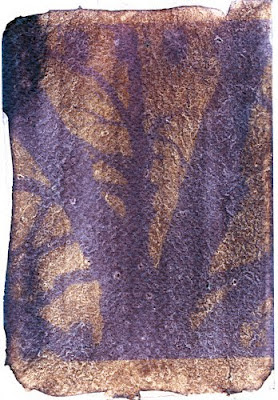 I suppose I got enough liquid to cover approximately an A4 piece a couple of times. I coated an A6 watercolour paper from a Windsor and Newton pad and did this twice allowing the first layer to dry in the dark and then I let the second layer dry in the dark as well.

I made a digital negative from a Sprocket Rocket picture of a Tree that I had used before and the contrast was quite high on this so the image is quite graphic. This was quite a dense image and I used OHP transparency paper for the substrate.I only used one layer as the black seemed opaque enough.

Now here comes the long part. Once in the contact frame, it was placed outside for about a week and then the weather wasn't so favourable, so it got moved around indoors wherever the sun was shining through the large french windows, until it made it up to the studio where it sat in front of the doors there for at least another three weeks sunbathing!

In all I think it was in the frame exposing for about eight weeks. I did check halfway through this period and there didn't seem to be that much definition so I left it. I'm quite happy with the results and I do wonder what they would have been like if we had had more of a sun filled summer in the U.K. but I don't mind waiting. I'm going to try a different paper this time and see what that is like.
Posted by Kylewis at 00:31