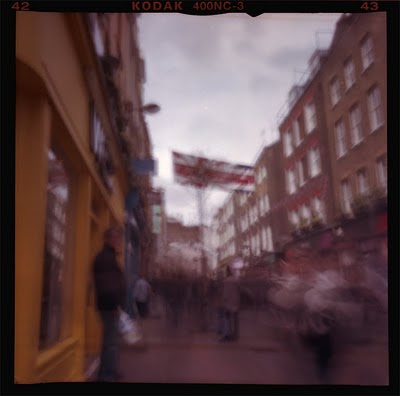 Last week, yes it's been a while but It's a mad house here! anyway I was asked by Adam Scott to come and do a guest speak at the lomo Gallery store London , the subject pinholes. I accepted must have been in a drunken stupor as I was asked at the launch party of the Dietrich Collection . I managed to get up the next morning and was not as prepared as I would have liked but took along some images as examples and talked my way through the 'techniques' I had used to capture/create the images.
The workshop was in fact centred around the use of the Diana+ and it's pinhole feature a group of about ten to fifteen adults left the store with cams in hand and a whole new experience awaiting them, we headed into Carnaby St. went off to Wardour through Soho, Piccadilly Circus and stood in the middle of the busiest crossing in London Oxford Circus, hopefully some shots of the thronging crowd will be captured, the day was a bit dull and we only had a few moments of brighter sunlight.
My rolls are not all processed yet, too much to do this week!
Posted by Kylewis at 11:36