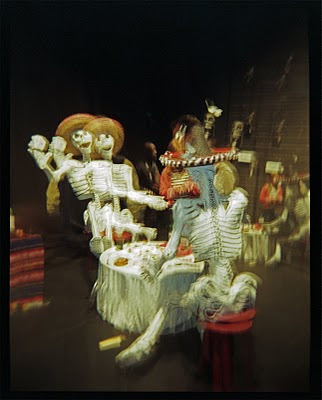 A little image for Dia de los Muertos!
October seems to have vanished in a blaze of glory or at least glorious colour, it has been filled with many events that would have been worth talking about at least at the time but in retrospect seem a little pointless to comment on at great length. I am a year older but also a year younger...than I thought! now this worries me because if I'm doing this forgetting thing now then it's really all down hill from here.
Did I mention I now have an allotment?! well I shall be taking images whilst I convert the plot into something more useable, it wasn't wildly overgrown but it has and is still being cleared slowly but surely and I have some great ideas for the biodiversity side of things with a living roof on the shed, that is soon to be erected. I have developed a new ability to sense where waste scaffold boards are hiding and grab them for raised beds. I also have great plans to use the shed as a Camera Obscura at the same time as a potting shed! I shall post pictures of the developments once I'm not using a film that is meant for the Art of Waiting project, though I have been using a number of cams including a Diana mini holga and LCA to record the changes.
Halloween celebrations have also been and gone but here they are a little bit of a damp squib but we are catching on, I should have pics of an Anime/Manga convention with some very 'cool' costumes which was held at Excel on the last weekend of October.
I have also been busy putting together a new book which I can now say is published and ready to view. This one has been a while in the making as I wanted to get the feel right. It is available to buy from Blurb and I have also been able to get a local bookshop interested. I hould at the moment be preparing for an exhbition in Dulwich, South London but I'm waiting for Frames and of course my prints are not quite as expected so the little time I have is now being wasted with waiting for corrections. I shall post again with details soon as I only have a few more days before it is supposed to be up. Love the pressure!!
Posted by Kylewis at 00:22