So, I suppose at least the ending sentiments in my last entry have been fulfilled and I haven't actually waited three months till my next entry!, This sounds like some confessional but I have been so busy with life and planning and well I'm not really sure where the time has gone. 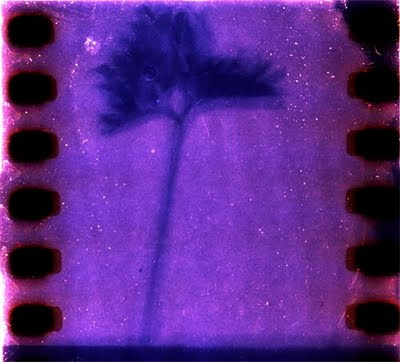 I have been exploring Lumen prints more and after doing numerous paper exposures I wanted to try something else, I had some film with only 12 exposures on it lying around that frankly I was not going to pay to get developed as they wanted to charge the same amount as a full roll so I thought I would see if it would react the same way as the paper. I thought it would be much faster. The first film was Fuji 100 expired and it was out for half an our in fair light, typical London light really. Anyway after the 30 minutes were up I took it in the house and popped it into the dev tank to fix it. At first I wondered if it would need to be developed but then thought I would keep the process the same as doing the paper. 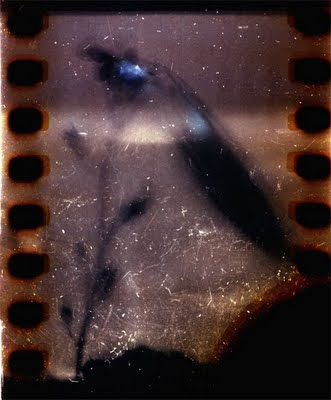 The negative was fixed for five minutes, in diluted 1:2 fix (IIford) and agitated continuously for five minutes. After that I washed it for five to ten and checked the results... okay the base had cleared to show the faintest detail, it was still a bit thick and there wasn't that much going on but something was visible. Extending the time I then left the next lot out for over 2 hours, again not a great deal. Changing to Kodak 200ASA was much better the film speed obviously made a difference. I put this strip out for one hour and 15 mins and then fixed the same way... result! this worked so much better, I don't think it was down to any other factors than changing the film everything else was pretty much the same.

Here are some of the first results. I love the idea of doing this and the release one gets from feeling precious about the film, it goes against the grain to just pull out film in the sunlight. The challenge though has been trying to find items, plants and the like that are small enough to go on the film!

Some of these images are going to go in the Sydenham Arts Festival, that I am taking part in this coming weekend 9th/10th and the following weekend of the 16th/17th, I'll talk more on this tomorrow if I get a moment between hanging pics!