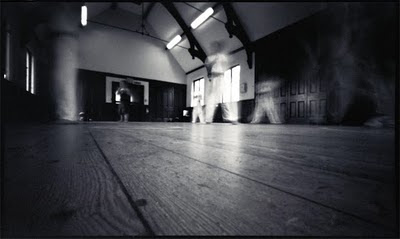 I didn't expect this to happen so soon, four days late for a post, now I did say they would be random but even I'm wondering where the time went. Looking back it's not difficult, Thursday and Friday were one long blur of activities, rushing from one event to the other and doing a lot of waiting for children in between.
Unfortunately with all this going on it's easy to neglect oneself and ignore an impending migraine but it gets you in the end! So, Hello Sunday! and another day of activity (for some) and inactivity for me, watching in fact and lots of it, in fact over five hours of it, A Tae Kwon Do grading is an interesting thing, tense for both those taking part and those looking on. It was a successful day, grading passed! my eight year old moves on.
While I watch the training sessions, I sometimes draw or make photos, this is one I did was with the Holga WPC 120 using Ilford Delta Pro, can't remember the exact exposure now but it wasn't ages but then that's a matter of perspective!
Posted by Kylewis at 23:19